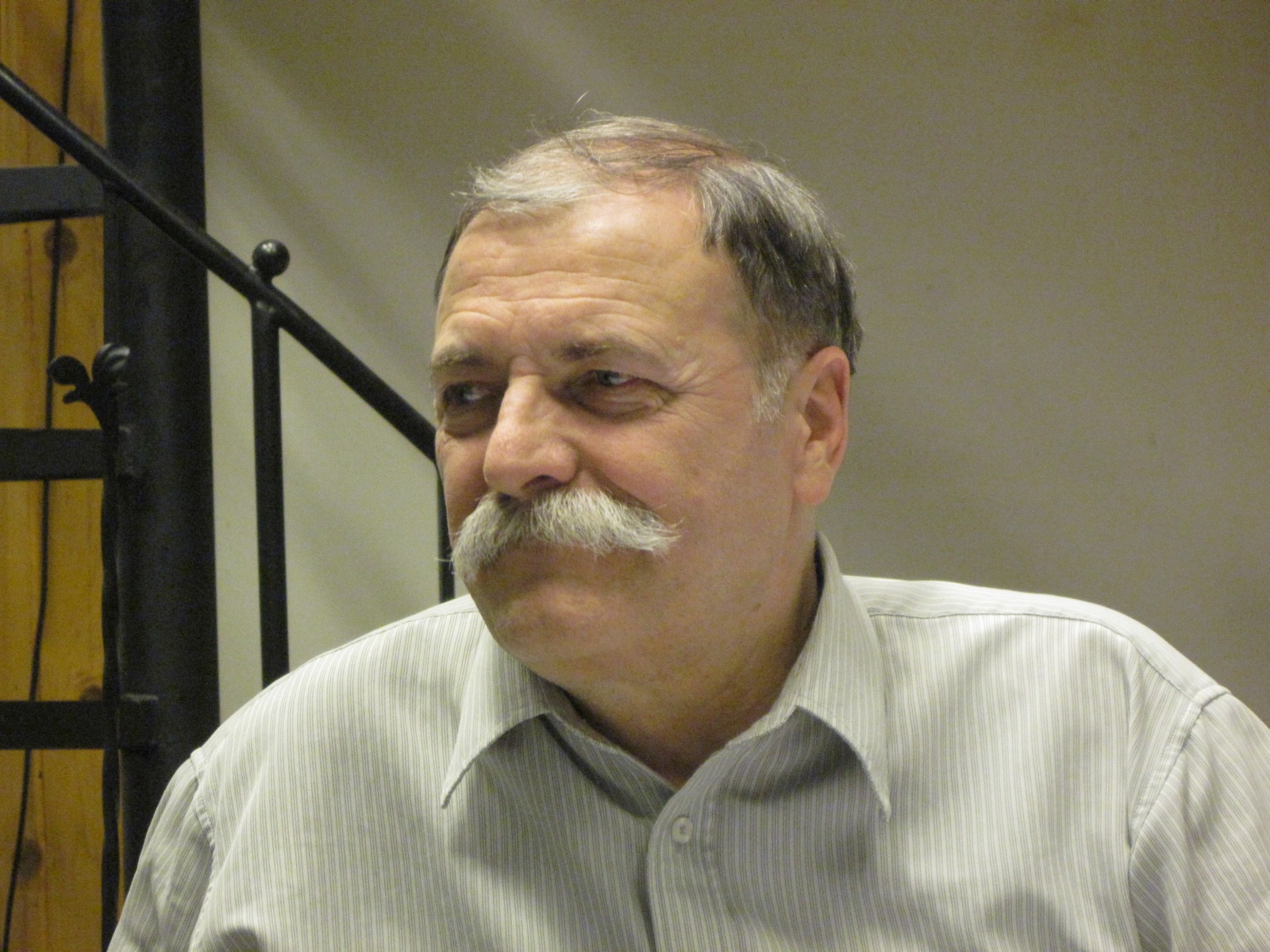 László Szentirmay (b. 1953) is an economist and journalist. As a former student at the Karl Marx University of Economic Sciences (Marx Károly Közgazdaságtudományi Egyetem, or MKKE), he actively participated in the organization of programs at the Közgáz-klub, including the political debates known collectively as Polvax, which represented an alternative forum for students vis-à-vis the Hungarian Communist Youth League (Magyar Kommunista Ifjúsági Szövetség, or KISZ). Furthermore, Szentirmay was one of the editors of the club’s bulletin Klub Közlöny (Club Gazette) and a member of the rock band Neoprimitív, which was well-known for its provocative lyrics. The secret police found the activity of club members to be dangerous due to their role in the shaping of opinion and the opportunity they had to initiate conspiratorial activity with students at other universities.

Szentirmay was raised in a middle-class family. His father was a lawyer and worked as a statistician within the Budapest municipal administration. After Szentirmay’s father was fired from his job in 1945, he bought a stationery shop that was eventually nationalized in 1951. Before Szentirmay’s birth, his parents and sisters were expelled from Budapest to a small town in eastern Hungary. They later they moved to the village of Ősagárd in northern Hungary, where László was born in 1953.

At the time of Imre Nagy’s government, the expulsions from Budapest were annulled, although the families that had been forced to leave the city were not permitted to return to their original homes. Szentirmay’s family was finally permitted to move back to Budapest in 1959.

Because of these experiences, the Szentirmay family maintained a deep opposition to the communist system. László Szentirmay attended the Karl Marx University of Economic Sciences between 1972 and 1976. Before beginning his university studies, he did not deal with political issues. At MKKE, he joined the left-wing circle of reform-minded students. Moreover, Szentirmay’s rebellion against the conservative family atmosphere in which he had been raised also motivated the formation and expression of his political opinions.

Szentirmay was a very active organizer of club life at the university, primarily beginning in 1976, when Gyula Jobbágy became the leader of the Közgáz-klub. As Szentirmay recalled, there were programs almost every night: concerts, films, political debates, and discos. This eventful period ended in 1981, when the political leadership of the university and the political police suppressed the activism of the students because they had come to regard it as an opposition movement.

According to Szentirmay, the Közgáz-klub was the best club at the university. A large number of students from other universities attended club programs at MKKE. Club members coalesced around Gyula Jobbágy, who was a good organizer and had an enthusiastic and impressive personality. Initially 40 to 50 members, later 100 to 150 members participated in the preparation of club programs.

Szentirmay and other members organized the so-called Polvax club in order to provide them with a venue for discussing issues in which they were interested and which the official information policy suppressed because they were regarded as taboo. It was clear for students in the club that the Kádár régime had taken an insincere stance with regard to many issues. Szentirmay in particular knew a lot about this. He worked during this time as an intern at Hungarian State Radio and thus had access to more information about Hungary, including foreign news, than his peers had.

Furthermore, Szentirmay was the member of the rock band Neoprimitív that had been established at MKKE. The band wrote comical lyrics to well-known songs. These parodies were full of provocative sexual and political connotations. Neoprimitív performed a new repertoire every year. The band was invited to clubs at other universities in Budapest and in the countryside as well. The cultural-political leadership of Hungary had information about the band. In 1980, Dezső Tóth, the deputy minister of cultural policy, used lyrics from a Neoprimitív song to illustrate the adversarial role of rock music. Tóth pointed out the relation between the cited lyrics and the Polish Solidarity movement. However, the parody had no connection to the latter movement at all, as it already had been written and performed two years earlier.

Szentirmay recalled in his interview that at Hungarian Radio his associates once made a remark about the “oppositional songs” that the Neoprimitív band sang, but that he felt that this represented no danger to him. This changed in 1981, when Gyula Jobbágy tried to organize an alternative, independent students’ organization. This was the so-called Meeting of Students from Budapest Universities and Colleges (Budapesti Egyetemisták és Főiskolások Találkozója, or BEFŐT). The political police judged this organization to be a dangerous institutionalization and unifier of the dissident student groups at the universities. The events in Poland also prompted the party to take quick and firm action against the organization. The resulting threats had an impact on the organizers. The activities surrounding Polvax were suspended for a time.

After Gyula Jobbágy was forced to emigrate and BEFŐT was suppressed, the Közgáz-klub began to decline. Szentirmay attempted to restart the political debate club in 1983 under the name Poltár. By this time, he had become more experienced and more exciting issues had emerged, but meanwhile the former group of activists and the contentious audience disappeared. According to Szentirmay, the party extinguished such activism among the young students through its chastening of the BEFŐT organization.

Szentirmay recalled that they were not afraid of the consequences. However, he was subjected to retaliation. Because of the prior Polvax debates, Szentirmay was forced to leave his job at the domestic news department of Hungarian Radio in 1978 and was transferred to the foreign news department, where he worked for 15 years.

According to Szentirmay, neither he nor Jobbágy were opposition figures and they never regarded themselves as such. They wanted to make reforms within the system, notably to KISZ, which they regarded as an autocratic and dogmatic organization. Szentirmay and Jobbágy belonged to the so-called “secondary movements” that stood between the official KISZ and the very small opposition groups. Szentirmay said during his interview with the Courage project that these groups attempted to operate “within the established frameworks, though at the same time to push the envelope.”

Szentirmay said with regard to his role that he was inspired by the “left-wing, reformist” atmosphere at the university, but he made the rational decision not to become an opposition figure. He did not participate in the actions of the democratic opposition. As a journalist, he could not sign Charter 77. At the same time, he sympathized with the opposition groups and read samizdat literature

Szentirmay restarted the Polvax group in 2011 and organized political discussions in 2016. On these occasions, his Neoprimitív rock band performed concerts as well.