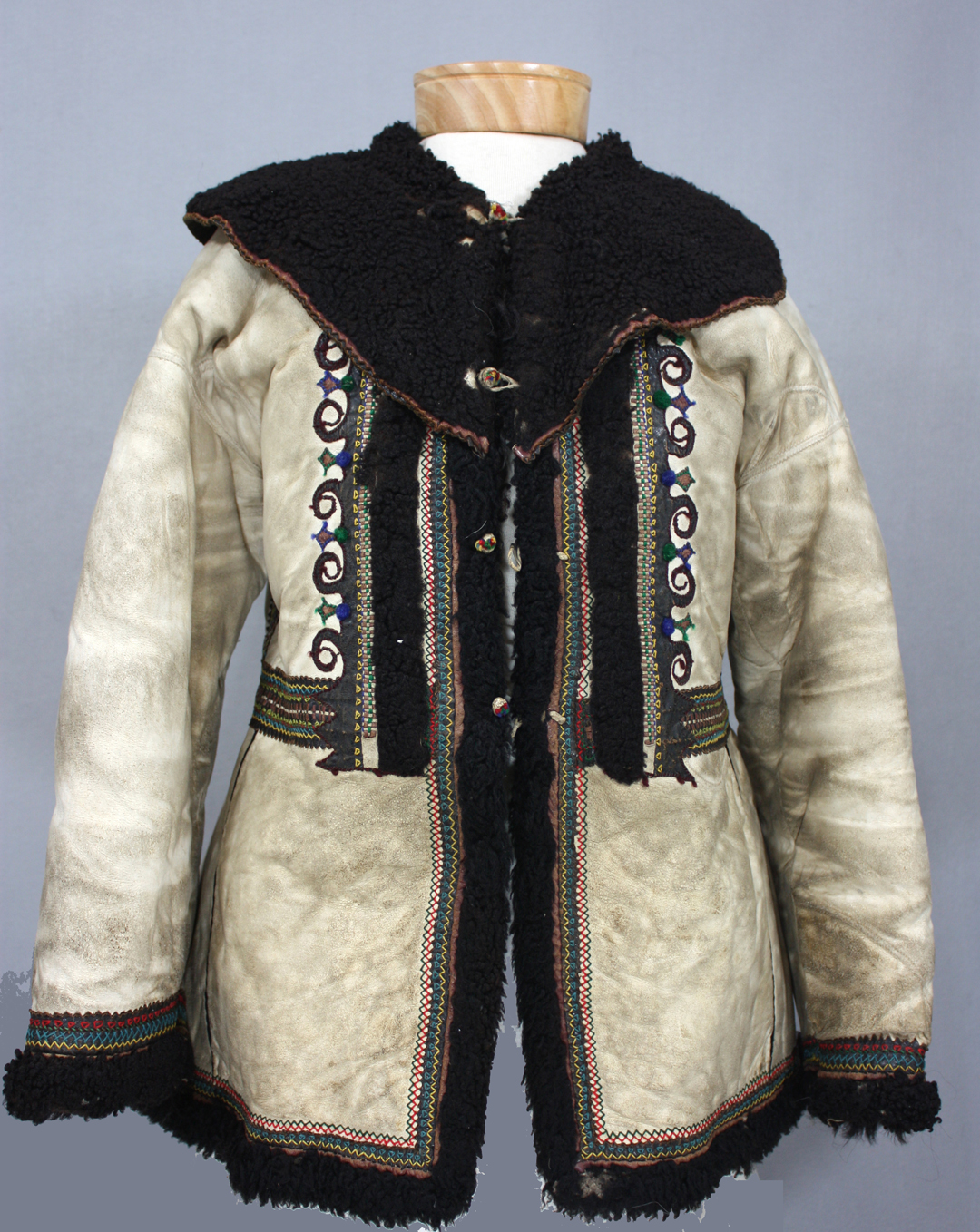 This sheepskin coat is one of the featured items of the Hnatiuk Collection at the Ukrainian Museum-Archives (UMA) in Cleveland, OH. The collection consists of more than 450 examples of Ukrainian textiles, which were produced for ritual ceremonies, for home use and as garments worn in the 19th and 20th centuries. Myroslav and Anna Hnatiuk compiled this vast collection of textiles over a number of decades. The first items were brought with them as they fled to the West along with hundreds of thousands of their compatriots toward the end of WWII. Though not classically representative of cultural opposition or resistance to communism, the motivations of the Hnatiuks make clear that their intention was to preserve pieces of Ukrainian culture until they were able to return home. As with other collections described in the COURAGE registry, folk art anchored Ukrainian resistance to communism within certain communities, more traditional forms of expression and clothing pushing back against the internationalism and uniformity that underpinned Soviet socialism.

Myroslav and Anna grew up in Galicia, part of the Western Ukrainian territories clandestinely annexed by the Soviets in 1939 as part of the Molotov-Ribbentrop Pact. The war disrupted his medical studies, which he resumed in Austria, eventually becoming a physician. He worked for the United Nations Relief and Rehabilitation in Germany before moving with his wife Anna and their sons to the US in 1949. They kept in touch with family and friends living in Soviet Ukraine, sending packages of food and clothing and receiving in return textiles and costumes. In the 1980s, they began traveling regularly to Ukraine, continuing to augment their collection with authentic leather, textiles, ceramics, and other folk items from Galicia and the Hutsul mountain regions.

The UMA published a volume about the Hnatiuk Collection (financed with a generous grant from the Ohio Humanities Council), which not only demonstrates the value of the Hnatiuk Collection as a whole, but also reveals a lot about the priorities of the museum’s leadership. When it came time for the Hnatiuks to find a new home for their collection, they invited (with help from Congresswoman Marci Kaptur) interested parties from Ukrainian museums and archives throughout North America. Many of those institutions tried to pick and choose the very best pieces for their own collections, while Andrew Fedynsky and Aniza Kraus of the UMA argued “the collection is an artifact in itself, a monument to a family’s dedication to Ukrainian culture.” As with many émigré communities, cultural preservation was an important part of life in the new world, nearly impossible to disentangle from the larger mission of diaspora institutions, which for a long time was to inculcate future generations with a sense of mission that contributes to the eventual liberation of Ukraine. The preservation of cultural heritage was part of a larger sphere of activism that included attending benefit concerts, church services, parades and demonstrations that both marked important turning points in history and supported Ukrainian independence.