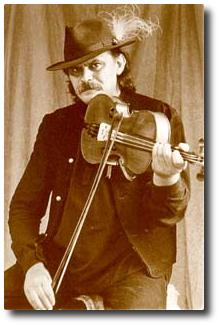 Péter Éri was born in 1953 in Budapest.
As a ten-year-old child, he won first prize in a dance competition with his performance of a dance known as the Lads’ Dance of Kalotaszeg (a region in Transylvania with a largely Hungarian-speaking population). His step-father was György Martin, the famous ethnographer. Martin took Éri on the trips in the course of which he collected material on Hungarian traditional dances and instrumental music, so as a child, Éri came into direct contact with living music and dance traditions. When he was 14, he became a dancer with the Bartók Dance Ensemble. His remained interested in music, and he became the bass player with the Sebő Band. Meanwhile, when the band Muzsikás was established in 1973, Éri played as a guest musician with the band. In 1978, he became a full member of the band. Éri graduated from Eötvös Loránd University of Budapest as an ethnographer and philologist of the Romanian language and Romanian literature. He plays the viola, the three-stringed “kontra,” the mandolin, and different kinds of flutes.
Éri is married. He has a son and a daughter.