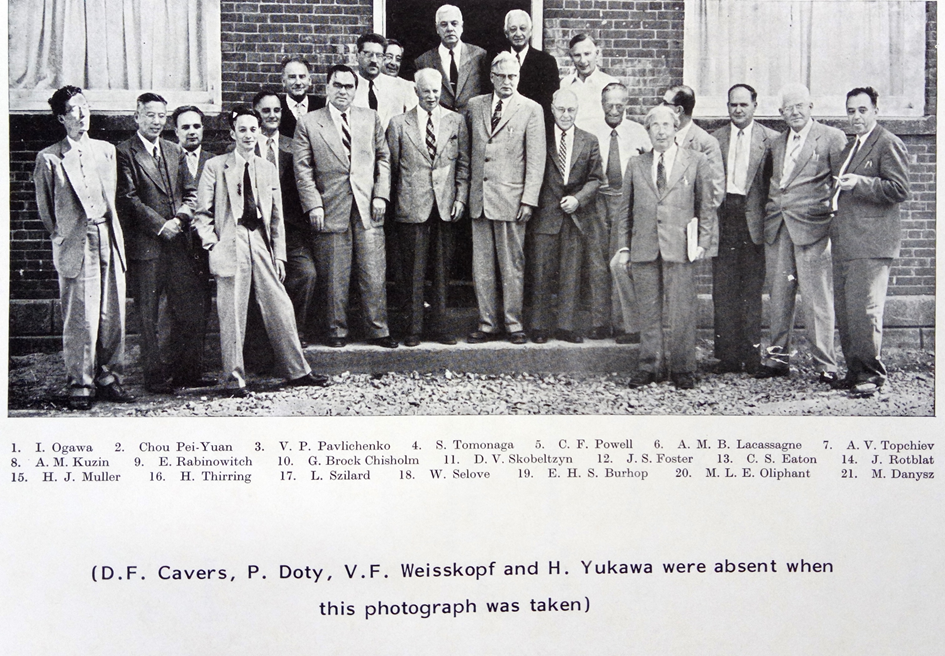 The Pugwash Conferences on Science and World Affairs (popularly called the Pugwash Movement) is an international organisation of scientists and intellectuals who advocate world peace. It emerged as an international conference on science and global problems, and at the time it was “a significant international factor and channel of communication among scientists,” (Knapp, 1995, 71), primarily discussing the dangers of the development of nuclear weapons.

Pugwash is a village in Nova Scotia (Canada), where the first conference (“Appraisal of Dangers from Atomic Weapons”) was organised by Joseph Rotblat and Bertrand Russell in 1957, so the movement was named after the village. The incentive to hold the first conference came from Cyrus Stephen Eaton, who funded the conference, but the foundation of the conference was the Manifesto, which was written by Bertrand Russell and Albert Einstein in 1955, in which they called on world scientists to debate the potential threat of nuclear war and the necessity for disarmament.

From the very beginning, the scientists who organised the first conference attempted to keep their gatherings in the form of free and informal dialogue to avoid institutionalisation. Hence there is no formal membership in the Pugwash Movement. Instead, only conferences and other meetings of scientists are held (Knapp 2013, 90). The organisational minimum is reflected in the work of Pugwash offices in Rome, Geneva, Washington and London (https://pugwash.org/contact-us/).

The movement experienced its peak in the Cold War period, especially during major world crises such as the Cuban Missile Crisis, in which Pugwash members played a useful role in opening communication channels in times of tense international relations. Based on the debates conducted within the movement, important international treaties were drafted, such as the Nuclear Non-proliferation Treaty (1968), the Anti-Ballistic Missile Treaty (1972), and the Biological Weapons Convention (1972) (Knapp 2013, 92-94). Because of the impact on the reduction of nuclear weapons in international politics, the Pugwash Conference, jointly with one of its founders, Joseph Rotblat, was awarded the Nobel Peace Prize in 1995. Later, the focal interest of the movement was the issue of biological and chemical weapons, as well as the problems of economic and scientific development in the Third World. The movement opened numerous topics in the field of ecology in recent years. To date, more than 400 meetings have been held (conferences, symposia, study groups, workshops, and meetings).

Several years after the establishment of the Pugwash Conferences, Yugoslavia had its first Pugwash member. This was Ivan Supek, who joined the movement in 1961 (fourth meeting of the European Group, April 1961, Geneva). In 1963, Supek founded the Yugoslav Pugwash Group as a part of the international movement, and in 1967 it changed its name to the Yugoslav Pugwash Alliance. Ivan Supek was its first president, with Marcel Lažanski and Vladimir Knapp as secretaries (Knapp 2013, 95-96). In September 1963, the 11th Pugwash Conference (“Current Problems of Disarmament & World Security”) was held in Dubrovnik, in February 1967 the Study Group on European Security (VI) was held in Zagreb, in April 1972 the 16th Symposium (“Necessity, Opportunities and Obstacles for European Collaboration”), and in January 1975, the 22nd Symposium (“Science and Ethics”), were held in Dubrovnik (https://pugwashconferences.files.wordpress.com/2014/05/participants-and-meetings-1957-2007.pdf).

Rotblat, Joseph. 1967. Pugwash: A History of the Conferences on Science and World Affairs. Prague: Czechoslovak Academy of Sciences.