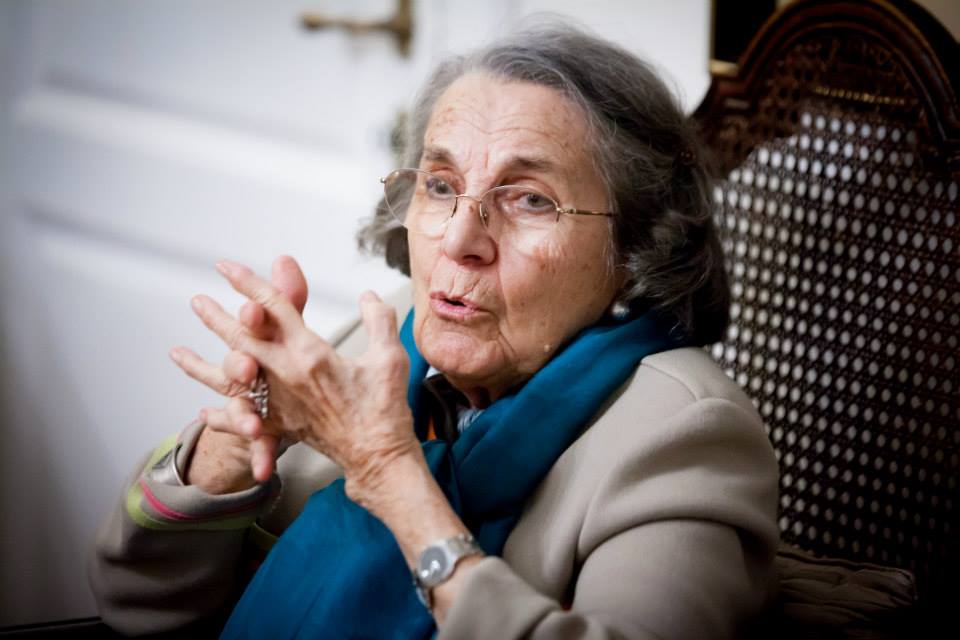 Sanda Budiș is a Romanian architect who first made herself noticed as a vocal member of the Romanian exile community in Switzerland in 1973, when she presented in letters and memoirs sent to Western political decision-makers, as well as to international organisations, the violation of human rights in Nicolae Ceaușescu's Romania. Later on, she became actively involved in the organisation and activity of the Romanian exile community, adhering to a number of existing anti-communist associations and organisations or contributing to the establishment of new ones. Especially in the 1980s, she stood out for her struggle against the massive destruction of historic monuments in the country and of the Romanian villages, an activity carried out within the Association for the Protection of Villages, Monuments and Historic Sites in Romania, based in Switzerland.

She was born on 18 August 1926 in Constanța, in a family of intellectuals. Her father, Alexandru Budiș, was an important general in the Romanian army and a political prisoner under the communist regime. Her mother was a painter, who, because of her “bourgeois-landowner” origin, was expelled in 1945 from the Union and Trade-Union of Visual Artists. She subsequently attended the courses of the School of Painting at the Romanian Patriarchy, and worked from 1947 as a church painter.

A graduate of the Faculty of Architecture in Bucharest in 1949, Sanda Budiș worked as a design architect at the design institute of the Ministry of Construction. In 1959, she obtained a church painter authorisation after attending the courses of the School of Painting at the Romanian Patriarchy. She worked as a church painter with her mother in several churches in and around Bucharest. She was not a member of the Romanian Communist Party. In 1969, she attended a Congress of the International Union of Female Architects in Monte Carlo and to the surprise of her acquaintances she returned home.  In 1973, she left Romania as a tourist and did not come back. She settled in Switzerland at Lutry near Lausanne, where she applied for political asylum. She left her mother and daughter back home in Romania. With difficulty and after many high-level interventions, she managed to bring her child to Switzerland. Initially, her efforts in this regard consisted of addressing dozens of letters and memoirs to personalities such as Henry Kissinger, Richard Nixon, Willy Brandt, Georges Pompidou, the Queen of the United Kingdom, and organisations including: the League for Human Rights (Geneva), the Refugee Support Committee (Geneva), Caritas (Lausanne), to which she was affiliated as a political refugee, the Federal Department of Foreign Affairs (Bern), and the State Department (Washington). These letters and memoranda drew attention to the human rights violations in Romania, pointing to the personal example of her daughter and mother who were not allowed to leave the country to visit. All her efforts were met with a negative answer. However, she did not give up and eventually succeeded. In December 1973, on the occasion of Ceaușescu's official visit to the US, she sent a telegram to the US President's wife, Pat Nixon, in which she presented her family's situation. Consequently, in February 1974 both her daughter and her mother received passports and they were able to travel to Switzerland. The child remained there definitively, while her mother returned to Romania, where she died in 1975.

In Switzerland, Sanda Budiş worked as an architect recognised by the architects' society in that country. Established outside of Romania, she was involved in the organisation and activity of the Romanian exile community. In 1975 she signed the "Holloway Memorandum" by which Romanians in exile demanded respect for human rights in Romania. It was drafted under the auspices of Ion Raţiu, a leading personality of the Romanian exile community, as a protest against Nicolae Ceaușescu's policies. Also in Switzerland she fought for respect for human rights in Romania and against the destruction of historic monuments and villages there. In this respect, she helped set up the Association against the Destruction of Villages and Historic Monuments in Romania, which was founded on 10 May 1989 at Romanel-sur-Lausanne (Switzerland). Among other activities, this association dealt with the establishment of partnerships between the Swiss and Romanian villages, organised by the association Opération Villages Roumains (OVR). The OVR plan, developed in December 1988 in Belgium, consisted in adopting all 13,123 Romanian villages to save them from the destruction planned by the communist regime.

She returned to Romania in 1990, but not permanently. She got involved in a number of projects, including supporting young Romanian peasants to carry out internships in Switzerland in order to be trained in modern agriculture. Her daughter, Sandra Pralong, has become an important figure in the development of Romanian civil society since 1989. She founded the Open Society Foundation, which she headed in the early 1990s, and through which she conducted a series of important projects.

In 2012, at the age of 86, Sanda Budiș published her memoirs in the book entitled Fata tatei și mama fetei: Istoria unei vieți între România și Elveția (Father's daughter and daughter’s mother: The history of a life between Romania and Switzerland), build around the most significant moments in her life. It is her family's story, a history inherent to what happened in Romania from the interwar period to the first years after the collapse of the communist regime, in which Romanian personalities or known figures of the post-war Romanian exile community appeared. At the same time, the book also provides an insider view of the situation of the Romanian emigration from the 1970s to the 1980s, especially that in Switzerland, where she lived. From this point of view, the volume is a landmark for the history of the Romanian emigration in Switzerland, given that relatively little information is available about the Romanian emigrants in this area. In 2017, the book was also translated into French.