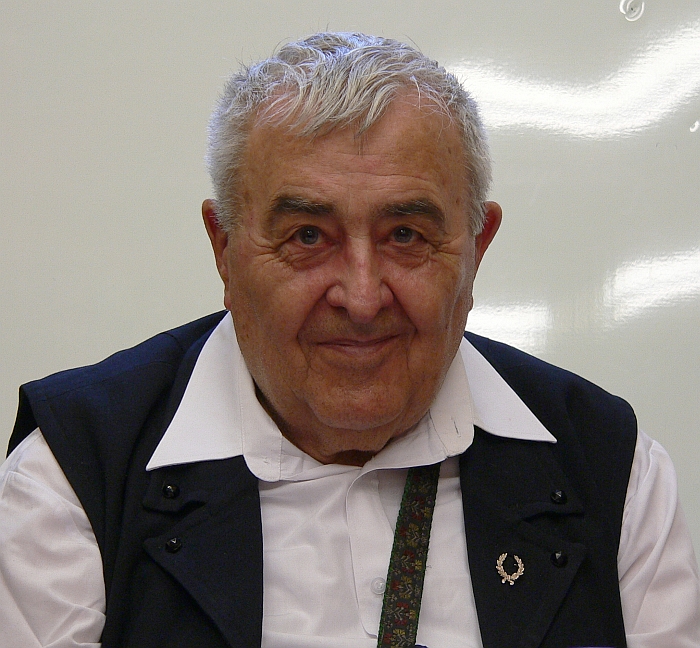 Zoltán Kallós (Răscruci, Cluj county, 26 March 1926 - 14 February 2018) was a Hungarian ethnographer from Romania, a folk music collector, who was also a honorary member of the Hungarian Cultural Society in Transylvania, a member of the Hungarian Ethnographic Society, and a member of the Hungarian Academy of Arts. Kallós completed his four years of elementary school in his native village of Răscruci and went on to study at the Reformed Gymnasium of Cluj. He continued his secondary-school studies in Sfântu Gheorghe/Sepsiszentgyörgy and Cluj, and earned a diploma as a primary-school teacher in 1946. He hailed from a well-to-do family. In 1933 his parents bought the hunting lodge in Răscruci previously owned by the Bánffy counts. In 1950, however, this was confiscated by the communist authorities, along with the five-hectare family property, under the pretext that Kallós’s father, listed as a kulak, had sown more than the amount stipulated in the sowing plan. He was punished with six months of prison and seizure of all assets. The case had an impact on Kallós’s career as well. Between 1946 and 1950 he worked as a primary-school teacher in Viștea, Cluj county before being admitted to the Gheorghe Dima Music Academy in Cluj-Napoca. His social background led to his disqualification for the first time as a second-year student. On that occasion he was able to re-enroll thanks to the intervention of Ilona Nyilas, deputy from Vișteain the Grand National Assembly. However, in the fourth academic year, in 1954 he was disqualified again due to his social background and was never able to complete his academic studies.

He carried out his military service in Moldavia, and the experience gained there motivated him to extend his folklore collecting activity from the ethnically mixed (Hungarians, Romanians, and Roma) area of the Transylvanian Plain to the Moldavian Csángós as well. Between 1954 and 1956 he worked as a primary-school teacher in Lespezi, Bacău county. Then, as the school in Lespezi was closed down as a consequence of the changes in the party’s policy on minorities subsequent to the 1956 Hungarian Revolution, he moved to Târgu Mureș, where, for a brief period, he worked as a “teacher of folk literature” at the Heritage House. In 1957 he chose the Csángó Land of Ghimeș as his field of research and until 1959 he worked as a teacher in the village of Lunca de Sus, which belonged then to the Hungarian Autonomous Region.

His collecting efforts attracted the attention of the authorities. The closer surveillance he was subjected to is also explained by the fact that he primarily worked and published together with specialists from Hungary, exposing his collecting of Hungarian ethnographic materials to the charge of nationalism. However, the secret police chose to handle Kallós’ case as a common-law offence. In 1959 and again in 1967 the People’s Tribunal of Miercurea Ciuc sentenced him to one year three months and two years respectively of correctional imprisonment (ACNSAS P051484, 2–46). Between the two trials, from 1960 to 1966 he continued his collection work as an employee at the timber company in Lunca de Sus. After he had served his second sentence, in 1968 he moved to Cluj-Napoca and in 1970 he published, in the proper professional environment his Balladák Könyve (Book of ballads), a volume that caused a sensation and earned him professional recognition. In 1973, with the cooperation of Attila T. Szabó and János Jagamas, another volume entitled Balladák könyve: Élő erdélyi és moldvai magyar népballadák (Book of ballads: Living Hungarian folk ballads from Transylvania and Moldavia) was published in Budapest and soon became a great editorial success.

Professional acknowledgment brought him once again into the centre of attention. In 1974 the Cluj-Napoca law court sentenced Kallós to two and a half years of deprivation of liberty on charges of committing a common-law offence. His arrest alarmed the Hungarian intellectual elite in Cluj-Napoca, the members of which – especially the poet Sándor Kányádi and the writer Andor Bajor – interpreted the trial aimed at discrediting the ethnographer as an act directed against them and, implicitly, the entire Hungarian community in Romania. The trials of 14 September to 28 September 1974 were attended by several personalities – apart from Kányádi and Bajor, the writers Tibor Bálint, GyörgyBeke, IstvánSzilágyi, and others were present – as a sign of protest against Kallós’ prosecution. They also voiced their intention to protest against the court sentence both at the Cluj-Napoca branch of the Writers’ Society and at other public forums. At the open sessions of the group trial involving ten persons – with Corneliu Brudașcu, a Cluj-Napoca-based painter also among the defendants – Kallós withdrew all of his previous declarations given under physical and moral coercion. His case was presented in detail in the Western press of the time and on Radio Free Europe (ACNSAS I203447/5, 390–395v, 397–398).

In retrospect, at a distance of forty years, Kallós could no longer remember whether he had served his prison sentences or not. All he could recall were his arrests and the fact that he had experienced life in penitentiaries all across Romania. In this regard he mentions the prisons of Poarta Albă, Codlea, and Aiud. He was released from the last of these thanks to a presidential pardon granted on the intervention of the Hungarian government. His account of these occurrences has not been supported so far by archival data. If true, his pardon granted on the intervention of neighbouring Hungary would constitute an unparalleled case in the history of Romanian–Hungarian bilateral relations during the communist regime. Communist regimes both in Hungary and in Romania looked at ethnographers with suspicion and labelled them as narodniks and nationalists. They were not allowed to select their own topics: the subject-matter was assigned to them. The government exercised pressure on them in an attempt to ensure that the discussed subjects served no other purpose than the consolidation and legitimation of the system. Under the dictatorship, Kallós, as a freelancer, did not benefit from financial support for his research. Nevertheless, his collection activity was closely monitored. This claim is supported by the informative surveillance file on Kallós, comprising two volumes and covering his activity up to the late 1960s (ACNSAS, I375159/1-2). There were occasions when he was subjected to criminal proceedings after purchasing an object, in an unsuccessful effort to prove him guilty of fraud and trafficking. His data providers, folk singers, were continuously harassed. As of the late 1950s, provocations, house searches, street tailings, and observations through agents were a daily phenomenon, and by the time of the change of regime in 1989 Kallós was the victim of continuous pressure from the authorities and the secret police.

In Kallós’ view, the main purpose of the Romanian Communist regime regarding minorities was to suppress, as much as possible, their national character and to eradicate the Hungarian sense of identity. Prior to 1989,Kallós consistently did enough work for several people. He carried out an activity aimed at preserving material and spiritual values which it would be impossible to accomplish nowadays as his data suppliers have passed away in the meantime. “I look around me; everyone in my surroundings has died. I’m left alone in the desert like a solitary tree.” – So Kallós confessed in an interview dated 21 September 2017 in Răscruci. Kallós’s name can be linked to the most extensive folk music collection ever carried out among the Hungarian-speaking communities. Records of selected pieces from the collection were primarily published after the change of regime and Kallós himself edited and published a series of audio materials based on his old recordings. As a singer he published two records himself (1997: Búsulni sohasem tudtam… (Sorrow was never my companion…), 1998: Idegen földre ne siess… (Don’t hurry to a foreign land…). He was the special consultant behind ethnographic documentaries and, as a singer, performed at folk music festivals. In addition to this, as one of the founders of Transylvanian and Hungarian dance-house movements he continued to organise folk-music and folk-dance camps. His influence as an educator is of great significance, considering that for many years he successfully motivated hundreds of young people to become familiar with and love Hungarian folk art. His professional advice and guidance paved the way for many generations, and were of much help in shaping the careers of musicians, dancers, and ethnographers.

Kallós’ most important accomplishment following the change of regime was the establishment of the Zoltán Kallós Foundation. Having in view the preservation and continuity of traditions, he donated all his assets to the Foundation. In 1992 the family property and the manor were returned to him after having been used for forty years by the local agricultural cooperative. Initially he offered the manor to the Reformed Church District of Transylvania, but, as Bishop Kálmán Csiha planned to use it as an old people’s home, he changed his mind, arguing that young people were more endangered than the older generation. Among the first activities of the newly established Foundation was the organisation of various camps. It was within the framework of the Foundation, in 1998, that Kallós’s private collection was officially put on display for the first time. In 1999 the Foundation launched its diaspora education programme, an activity derived from diaspora camps. Kallós’s colleagues visited Hungarian families in about twenty settlements in the Transylvanian Plain only to discover that education in their mother tongue was not accessible in any of those villages. Consequently, they founded a Hungarian kindergarten and a primary school with the possibility of boarding. After a twenty-five year interruption of primary education, the programme was launched with four children, and by 2017, 140 children attended the institution. With the introduction of education for members of the Hungarian community who lived scattered throughout Transylvania, the Foundation’s activity, so far restricted to two summer months, became permanent.

In recognition of his work both before and after 1989, its founder was continuously honoured by the Hungarian government with prestigious prizes and awards. Among other distinctions, Kallós received the Kossuth Prize (1996), the Hungarian Heritage Award (2000), the Hungarian Corvin Chain (2001), the Kölcsey Memorial Plaque (2003), and the Hazám Award (2006). In 2014 he was presented with the Artist of the Nation Award, and in 2017 he also received the Kossuth Grand Prize (ZoltánKallós Foundation 2017). On 5 April 2017 the European Committee and Europa Nostra announced the list of winners of the 2017 EU Prize for Cultural Heritage/Europa Nostra Award, which counts as the most prestigious distinction in the European Union in terms of safeguarding cultural heritage. Zoltán Kallós was presented with the award in the category “Dedicated Service to Heritage.” As a result of the subsequent online voting Kallós received the Public Choice Award as well. At the time of his death in 2018, he was listed among the most decorated Hungarian personalities (Europa Nostra 2017).