Protest message of the International Association for the Protection of Monuments and Historic Sites in Romania, in French and English, Paris, 1985 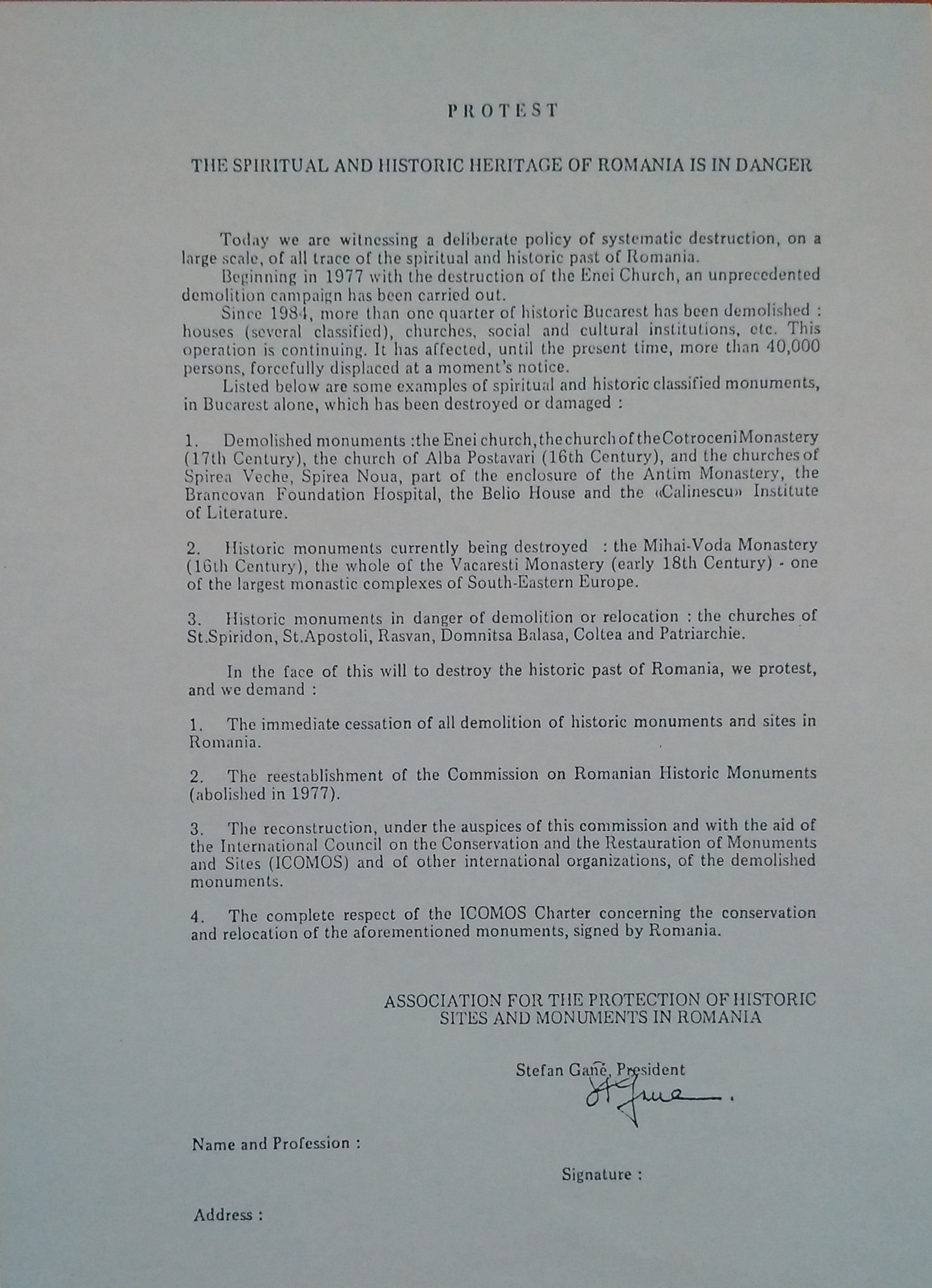 This document reflects the way in which the Romanian exile community organised itself and acted to promote media coverage in the West of the urban systematisation project of Ceaușescu's regime, which tacitly involved the demolition, mutilation, or destruction of the national heritage. The protest message was shared when the International Association for the Protection of Monuments and Historic Sites in Romania was founded in 1985, in Paris. The purpose of the association was to draw the attention of political decision-makers and international public opinion to the communist regime's plan for the demolition of the architectural and urban heritage of Romania. The actions undertaken within the Association focused particularly on the promotion of media coverage of the demolition of the city centre of Bucharest, which the communist authorities planned to reorganise according to their architectural vision. On the occasion of its foundation, the association organised a protest on the streets of Paris, during which it distributed a protest message to participants and passers-by with texts about communist Romania accompanied by photographs of historic monuments destroyed by the communists or scheduled to be demolished or moved. A copy of this protest message was sent by post to several Romanian exiles in order to convince them to join the Association and get involved in unmasking the communist regime in Romania and, in particular, the urban systematisation project of the Ceaușescu regime. This document was sent by the president of the Association, the architect Ștefan Gane, to Sanda Stolojan, a personality of the Romanian exile, who kept it in her private archive. The document, which can be consulted in the IICCMER collection, was written in English and French, in A4 format. The material, titled "Protest: Romania's historical and spiritual heritage is in danger," briefly outlines the consequences of the Bucharest systematisation project undertaken by the Communist authorities since 1977 and some examples of monuments from the historical and spiritual heritage of the Romanians that had been destroyed, demolished, or mutilated by the Ceaușescu regime. Against this background, the association protested, asking for: a stop to the  demolition of historic monuments and sites in the country; the re-establishment of the Romanian Historic Monuments Commission, abolished in 1977; and the rebuilding, under the aegis of this Commission and with the help of the International Council for the Conservation and Restoration of Monuments and Sites and other international organisations, of the demolished historic monuments and sites.