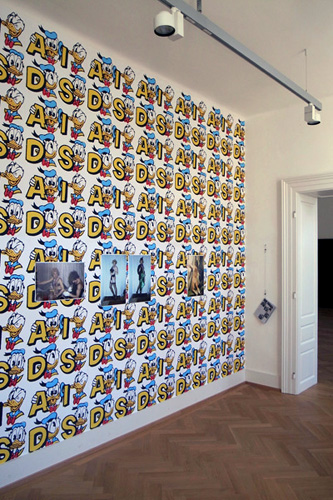 Karol Radziszewski’s Kisieland is a long-term project that started in 2009. It is a piece documenting encounters of Karol Radziszewski with Ryszard Kisiel. The film is based on Kisiel's private archives and describes the underground queer and avant-garde culture in socialist Poland. It uses different visual representations of queer culture of Polish 1980s. Ryszard Kisiel, a stakeholder of the Queer Archives Institute, took various photographs of queer milieu in dark times of anti-gay campaign "Hiacynth" (1985-86), now Radziszewski stages them as a mean to reconstruct the social history of minority movements, LGBTQ strategies, and artistic avant-garde in martial state Poland.

The masterpiece is one of the founding stones of Polish queer art - it not only shows the roots and genealogies of Polish LGBTQ identity, but also links past experiences with contemporary queer studies' discussion about resistance of minority groups.
Kisieland was purchased by the Museum of Modern Art in Warsaw in 2016 to be included in its permanent collection.