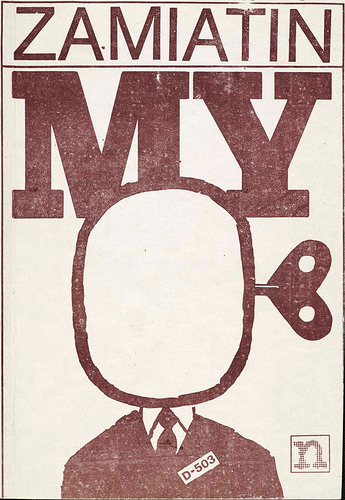 "My/Eugeniusz Zamiatin" is the 1985 Polish samizdat edition of Evgienii Zamiatin's dystopian novel We. It was published by the largest underground press, Independent Publishing House (Niezależna Oficyna Wydawnicza, NOWA), and translated by Adam Pomorski. Zamiatin's masterpiece was a blueprint for such classics of anti-totalitarian literature as George Orwell's 1984 and Aldous Huxley's Brave New World. The book went on public display in 2011 as one of the items presented at "Out of this World: Science Fiction but not as you know it", the British Library’s first exhibition to explore science fiction through literature, film, illustration and sound. Curated by Andy Sawyer, Science Fiction Collections Librarian at the University of Liverpool, the exhibition traced the development of the genre and showed how science fiction had turned from a niche into a global phenomenon.