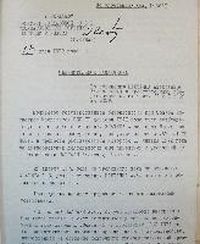 Initially, the case against Alexandru Șoltoianu was part of the larger Usatiuc–Ghimpu–Graur affair. Șoltoianu was arrested on 13 January 1972, together with the other protagonists in the affair. However, on 29 April 1972 his case was separated from the others, as the Soviet authorities found no compelling evidence of a direct link between Șoltoianu’s activities and those of the National Patriotic Front. The accusations against Șoltoianu were based on the claim that “he systematically pursued certain organisational activities aimed at the creation of an underground nationalist organisation with the goal of fighting the social order currently in existence in the USSR and of undermining Soviet power.” An especially damning count of indictment referred to  “spreading, among his immediate entourage, of calumnies and lies that discredited the Soviet state and social order,” which included “producing, depositing, and spreading certain documents of an inimical character [to Soviet power].” Interestingly, the specific accusation of advocating the “secession of the Moldavian SSR and a part of the Ukrainian SSR” from the Soviet Union and their unification with Romania does not figure prominently in this document. The special severity of Șoltoianu’s treatment and his harsh sentence owed much to his intention to create a widespread network of anti-Soviet resistance with clear ethno-national aims based on recruits from among the “student youth and intelligentsia of Moldavian nationality”. Although the materials of the inquiry clearly show that Șoltoianu’s circle of supporters never exceeded fifteen to twenty people at best, he was punished much more for his intentions and the audacity of his unfulfilled plans than for the actual outcome of his activity. Șoltoianu’s training in international relations and Oriental studies also led to his sensitivity to historical literature and to his extensive ruminations on the “colonial” nature of Russian–Moldavian relations in the USSR, which he systematically compared to the Russian imperial experience. During his trial, Șoltoianu attempted to convince the judges that he never intended his activity to be “anti-Soviet” or “anti-communist,” i.e., that he never targeted the system as a whole, but only the domination of ethnic Russians and the alleged discrimination against his fellow Moldavians. It seems, however, that the ethnic framework of his arguments convinced the authorities of the potential danger of his activities, given that local nationalism was perceived as the most serious challenge on the Soviet periphery. Certain of Șoltoianu’s papers seemed to incite to open revolt against the Soviet regime, while his open and radical criticism of Soviet foreign policy (especially of the Soviet invasion of Czechoslovakia) completed the picture. Perhaps the most troubling element for the Soviet authorities was his project of creating a wide network of student associations in Moscow, Leningrad and a number of western Soviet cities (Kiev, Odessa, Kharkov, Lvov, Ismail, Chernivtsi / Cernăuți and Belgorod-Dnestrovskii). The “bourgeois nationalism” and “radical anti-Soviet leanings” that Șoltoianu displayed in the drafts of his projected political treatise, while serious enough, paled in comparison with his organisational ambitions (despite the extremely modest outcomes). The speech that he made in front of a group of Moldavian students visiting Moscow in January 1963 seemed to have confirmed the potential danger of his propaganda efforts. The accusatory act carefully summarised Șoltoianu’s “subversive” activities, tracing the emergence and growth of his informal network and apparently proving the grave nature of his ideological deviations through ample citations from his personal notebooks. The accusatory act was issued on 12 July 1972, five days before the delivery of the final sentence. This document is revealing not only concerning Șoltoianu’s own views, but also regarding the hierarchy of danger that the Soviet regime perceived and constructed on its “national” peripheries. Șoltoianu was accused (and correspondingly sentenced) according to art. 67, part I and art. 69 of the Penal Code of the MSSR: anti-Soviet agitation and propaganda / participation in an anti-Soviet organisation aiming at committing dangerous state crimes. His radical “anti-imperialist” and anti-Russian agenda, while in many respects similar to the aims and strategy of the Usatiuc–Ghimpu–Graur group, was unique in its sophistication and wide-ranging ambition.